Dr. Starzl’s best-known contribution to pancreas transplantation [ref 1] was his rescue from oblivion of a procedure developed by Richard Lillehei at the University of Minnesota in the mid-1960s and used by Lillehei on June 3, 1969, for the first successful human pancreas alloengraftment (Ann Surg 172:405-436, 1970).  This case was the nostalgic centerpiece of an international convention in Minneapolis on December 8-9, 2006, that included a tribute to Lillehei who had died in 1981 under mysterious circumstances in New York City while carrying out his daily ritual of running.  At the 2006 scientific session, approximately a dozen “pioneers” described their own role in development of pancreas transplantation.  Their reminiscences were to be published in the journal, Clinical Transplantation.

The title of Starzl’s lecture and of his simultaneously submitted manuscript was:  “Resurrection of Whole Pancreaticoduodenal Transplantation at the University of Pittsburgh”.  The lecture was embellished with 27 slides of which 5 were used in the manuscript.  Both versions began with the following paragraph:

Thank you for including me in this illustrious group of speakers.  Perhaps I should make clear that the title of my talk was furnished by the organizing committee.  I can only assume that my good friend, John Najarian, came up with the resurrection idea.  Normally, resurrections require the presence of saviors who end up being crucified.  Once the facts surrounding our 1984 article (ref 1) are revealed, I hope to be stripped of my savior status, or at least the martyrdom.

Starzl’s crucial modification of Lillehei’s operation had been the creation of an allograft duodenal bubble through which the graft exocrine secretions were drained by anastomosis into the recipient’s bowel (Figure 1). After describing the rationale for the modification, Starzl proceeded with an annotated account of the misdirections and misconceptions that had led to the abandonment of Lillehei’s whole pancreas transplantation.  A prime example of misdirection was drainage of pancreatic exocrine secretions into the recipient bladder.  This and most of the other stumbles were attributable to speakers on the 2006 program who were not inclined to write confessional manuscripts.  After 5 years, David Sutherland, the guest editor for the reclamation project gave up soliciting the delinquent manuscripts and remanded Starzl’s unpublished manuscript to the University of Pittsburgh Archives along with a copy of his lecture (including its 27 slides).  Both versions are available.

Today, the modified Lillehei operation is commonly accompanied, preceded, or followed by kidney transplantation.  In 2007, Starzl published an article describing the transplantation 2 decades earlier (June 1988) of a liver and pancreas from the same cadaveric donor.  The recipient was a then 52 year old man with Type 1 diabetes whose end stage liver disease was caused by hepatitis B virus [ref 2].   Although, this was the first diabetic liver recipient treated with a simultaneous pancreas transplant, the co-transplantation of these 2 organs is no longer rare.  It is usually done with some modification of the “cluster operation” originally developed to treat extensive upper abdominal malignancies (Figure 2) [ref 3] (See: Multivisceral & Intestine Transplantation).  With the hepato-pancreatic procedures, the liver allograft is provided first access to the new supply of hepatotrophic insulin (See: Hepatotrophic Physiology.)

The timing of Dr. Starzl’s entrance in the field of pancreas transplantation is graphically illustrated in Figure 3 and Figure 4, which summarize the citation frequencies of the papers cited in this Discussion as well as all publications related to this Theme, respectively. The citation frequencies of individual publications is graphically illustrated in Figure 5. 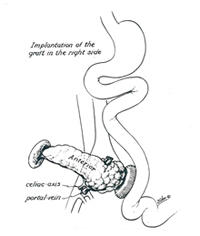 Transplantation of the whole pancreas to the pelvic site with drainage of its exocrine secretion into the recipient duodenum through a “bubble” of allograft duodenum.

In continuity transplantation of liver and pancreas for patients with end stage liver disease and coexisting diabetes.