Therapeutic Implications of the Paradigm

Given that all adaptive immunologic outcomes of transplantation are defined by donor leukocyte/antidonor T-cell balances (See: Generalization of the Transplant Paradigm), the role of transplant immunosuppression (irradiation, drugs, antilymphoid antibodies) is to tilt and maintain a balance favoring the donor leukocytes.  With bone marrow transplantation, the conditions for the tilt either preexist (immune deficiency disease) or are created by irradiation or drugs that enfeeble the impending response to the donor cells.  Treatment after the cell infusion is given only to the extent required to prevent the graft from rejecting the recipient (GVHD) or the recipient from rejecting the graft.

With conventional organ transplantation, the tilt is created after the arrival of the donor passenger leukocytes.  Here, the covert but true goal is to use immunosuppression to permit the natural double immune reaction between donor and recipient to continue long enough to allow its reciprocal clonal exhaustion-deletion while protecting the organ from damage.  If efficient exhaustion-deletion can be accomplished during the dangerous period of the first few weeks, the amount of immunosuppression may be reduced or even stopped (See: Generalization of the Transplant Paradigm) as in the occasional dog or human recipients first observed by Dr. Starzl in 1962-63.

With their fresh insight into engraftment mechanisms [ref 1], Starzl and Zinkernagel proposed ways of improving the treatment of organ recipients [ref 2].  They began by pointing out that the heavy multi-drug immunosuppression given at most centers from the time of organ transplantation could erode the seminal tolerance mechanism of clonal exhaustion-deletion.  The recipient then would be permanently committed to toxic amounts of immunosuppression to prevent reemergence of the suboptimally deleted response(s) when treatment is lightened (Fig. 1).  The authors proposed avoiding the self-defeating consequences by application of the same 2 therapeutic principles that underpinned bone marrow transplantation:  recipient pretreatment, and the least possible use of post-transplant immunosuppression (Fig. 2).

Modern versions of the ALG introduced by Starzl in 1966 made rapid pretreatment feasible with a low risk of GVHD while minimal post-transplant immunosuppression was made easier by increasingly potent immunosuppressive drugs (Fig. 3). When applied together, these principles have reduced the burden of immunosuppression with all kinds of organ transplantation [ref 4]. The possibility of tilting the balance by the adjunct infusion of donor leukocytes became a realizable objective, but with the proviso that the extra load of donor cells is delivered at the correct time relative to arrival of the passenger leukocytes and the delivery of immunosuppression [ref 4].

Therapeutic Implications of the Paradigm Bibliography and Citations 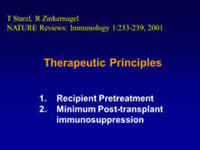 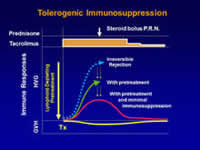