Human bone marrow transplantation was the equivalent of the mouse tolerance models (Fig. 1).  As in the mice, successful engraftment required a close match of tissue (histocompatibility) antigens.  Otherwise, the immunocompetent donor cells were either rejected, or alternatively, turned the table and rejected the recipient (graft versus host disease [GVHD]) (Fig. 2).  Human tissue antigens that came to be known as HLA (human leukocyte antigen) were first discovered in 1958.  However, a decade passed before enough of them were identified to permit donor-recipient matching.  Consequently, bone marrow transplantation could not be accomplished in patients until 1968 [ref 1].

In contrast, kidney allograft survival for at least one year was precociously achieved in humans without regard for tissue matching, without a “proof of principle” animal model and with no explanation for the successes that were rare exceptions to rejection and recipient death (Fig. 3) [annotated in ref 2]. The first 7 examples were compiled between January 1959 and April 1962 (1 in Boston, 1 in London, and 5 in Paris) in recipients who were irradiated in advance of kidney transplantation.  An eighth recipient was treated only with drugs that were given daily after transplantation.

Because none of the 8 seminal organ recipients had been given a leukocyte infusion, the undisputed conclusion was that the donor leukocyte chimerism of the mouse tolerance models (See: The Leukocytle Chimerism-Tolerance Association) was not a factor in the successful engraftments [ref 3].  This error was not corrected until a third of a century later (See: Discovery of Microchimerism, A New Transplant Immunology Paradigm, Generalization of the Transplant Paradigm and Therapeutic Implications).  In the interim, organ and bone marrow cell transplantation developed independently (Fig. 4).  Beginning in 1962, pretransplant irradiation was replaced by daily post-transplant drug immunosuppression for the treatment of organ recipients [ref 1], a switch in which Dr. Starzl played the dominant role.

The mouse to man succession of bone marrow transplantation 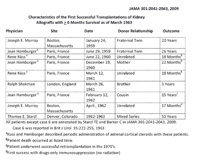 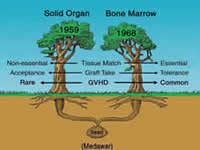 The split of bone marrow and organ transplantation