Although Dr. Starzl’s primary interest was liver transplantation, he wrote 148 articles concerned primarily or exclusively with kidney transplantation [ref 4].  His involvement with the kidney began when he obtained a supply of azathioprine in early 1962 for testing in dogs.  His best results in both canine kidney and liver models were with the daily administration of azathioprine before and after transplantation, adding prednisone only to reverse the rejection that developed in virtually every experiment (See: Drug Immunosuppression).  As described in a detailed letter of November 30, 1994, the Denver experimental design and observations differed from those in other laboratories.  Using the protocol derived from the canine studies, Starzl produced the first-ever series of repetitively successful human kidney transplantations (Figure 1).   The first 10 cases were published in October 1963 [ref 1].  One month earlier, Starzl presented a greatly expanded series (now 33 patients) at a meeting in Washington organized by the National Research Council and held at the National Academy of Science.

The explosive consequences of the preemptive September meeting were described 30 years later by contributors to Paul Terasaki’s collection of reminiscences of “transplant pioneers” [ref 2].  Rene Küss, the inventor of the kidney transplant operation (Figure 2), recalled that:

"In September 1963, a small international committee was held in Washington and was attended by the 20 to 25 pioneer surgeons and physicians working in the field of transplantation.  At this meeting, each of us presented the results of his experience which, overall, was fairly disastrous.  The review of results caused some of us to doubt the real value of renal transplantation when, at the end of the meeting, a newcomer amongst the group of pioneers, Tom Starzl, unraveled three rolls of paper which he carried under his arm and raised our hopes by presenting his results obtained with azathioprine and cortisone.  Personally very impressed, I accompanied him when he returned to Denver, in the company of Schackman (sic) and Poisson, his [Schackman’s] fellow at the time.  In addition to his operative virtuosity, we were able to appreciate the extraordinary vitality of his group and his already very promising results" [ref 2a].

Paul Russell, one of America’s leading surgeon-scientists and a protégé of Peter Medawar (See: The Leukocyte Chimerism-Tolerance Association), also participated in the Washington meeting. n describing his soon to be launched kidney program at the Massachusetts General Hospital kidney transplant program, he wrote:

"I was further encouraged by the results which were pouring in from the pioneering transplant programs at the Medical College of Virginia under Dave Hume, who had moved there from the Brigham not long before, and from Denver, where Tom Starzl and Bill Waddell already had shown some especially interesting things.  For me, the most important and surprising thing which I learned first from the Denver experience was that acute rejection of the transplanted kidney could actually be reversed by increasing the dosage of a cortisone derivative.  None of the experimental work up to this time had really fastened adequately on this matter of the reversibility of rejection reactions and almost all the rejections I had seen in experimental animals looked pretty irreversible" [ref 2c].

In his contribution to Terasaki’s pioneer collection, John Dossetor, a leader of Canada’s first transplant initiatives, referred to the Colorado experience as a "Rocky Mountain High".  He then described how:

"Tom Starzl … had been in the early work in renal transplantation, but between November 1962 and March 1964, his team performed 64 living-donor renal transplants (46 living-related, 18 living-unrelated), when others were doing renal transplants at a deliberate but slow rate…  Many of us thought he was "putting himself out on a limb" by doing so many, so quickly, before the long-term results of the early ones were known.  We were wrong.  He took the subject from "clinical research" to "established procedure" in a few short months.  World opinion soon changed from skepticism (tinged with awe) to frank admiration.  Now we can add a fourth sentiment: gratitude.  It is mentioned here as it had an effect in consolidating clinical renal allograft programs in other centers, too". [ref 2d]

A similar retrospective view was expressed in 1993 by Dr. Clyde Barker, Surgical Chairman at the University of Pennsylvania who had founded the Penn kidney program in 1966 following a visit to Denver.  Barker’s review nearly 30 years later of Starzl’s 1992 biography The Puzzle People included the following statement:

"In 1962, shortly after joining the faculty of the University of Colorado, Dr. Starzl performed his first renal transplant upon a patient who still survives 29 years later.  Within a year, he also did the world’s first human hepatic transplants.  Their failure caused him to focus his attention temporarily on making a success of renal transplantation.  Without any new or unique drugs or other weapons, his energy, mastery of technical surgery, and attention to detail allowed him to surpass the earlier results of other groups.  Within a year, he had more surviving renal transplant recipients than the rest of the world combined.  These results indicated that transplantation of the kidney was practical therapy and many transplant surgeons believe that his accomplishments during this period advanced the field by a decade".

When the Colorado series was started in 1962, Murray’s long-standing clinical kidney transplant program at the "Brigham" had been the only other active one in America.  A third clinical program was started a few weeks later at the Medical College of Virginia by David Hume to whom Starzl provided daily phone information about the Colorado cases.  During the next 2 years, nearly 50 centers were founded in the United States or were gearing up, all using various versions of the azathioprine-prednisone protocol.  A similar stampede occurred in Europe.  In 1964, Dr. Starzl published Experience in Renal Transplantation based on his experience with 75 cases in which the kidneys had been obtained from living volunteer, cadaveric, or (in 6 cases) baboon donors [ref 3].  The 28-chapter book provided an instructional manual with which new programs could be developed.  It also established a practical framework for all other kinds of organ transplantation and according to the Institute of Scientific Information (ISI, Philadelphia) was the most cited textbook of the 20th century.

The kidney transplant accomplishments were empirical.  Without knowing either how the immune system functioned or the way in which it had been subverted, Starzl had discovered in dogs and confirmed in human kidney recipients how to successfully engraft organs.  This was done with a readily taught and easily learned algorithm of pattern recognition and therapeutic response that was neither organ nor immunosuppression-specific.  Kidney transplantation now entered a phase of “maturation”.  Recognizing that increasing experience alone would not improve results, Starzl closed his kidney program for 6 months and organized the first prospective tissue matching trial in collaboration with the UCLA histocompatibility team of Paul I. Terasaki.  Their 5-year study established what could and could not be accomplished with human tissue matching (See: The Science & Politics of Tissue Matching).  The most important practical conclusion was that a tissue type match did not predict clinical outcome unless it was perfect.  Tissue matching obviously would not be key to organ transplantation.

Instead, major improvements during the next 25 years for all kinds of organ transplantation were almost entirely dependent on Starzl’s introduction of new drugs or drug combinations.  Because of its technical simplicity, kidney transplantation continued to play a pivotal role in the clinical evaluation of these agents:  adjunct ALG followed by cyclosporine and tacrolimus in combination with prednisone [ref 4]. When cyclosporine replaced azathioprine as the baseline immunosuppression (1979-80), and was replaced in turn by tacrolimus (1989-90), Starzl began use of the new drugs as monotherapy, adding prednisone or ALG only to treat rejection.  As with azathioprine in 1962-63 but much less frequently, some of the acute rejections that developed under monotherapy could not be reversed.  However uncommon, such cases resulted in the same instinctive drift to preemptive immunosuppression that had occurred with the bellwether kidney cases of 1962-63 (See: Drug Immunosuppression).  In time, prednisone and other secondary drugs were started at the time of transplantation at most centers instead of being withheld until needed.

Meanwhile, the mechanisms by which organs could be engrafted remained enigmatic.  After his retirement from clinical surgery in 1991, Starzl developed evidence that organ alloengraftment is a highly variable form of donor-specific tolerance.  In turn, the tolerance could be explained by the combination of 2 mechanisms:  clonal exhaustion-deletion and immune ignorance (See: Discovery of Microchimerism, A New Transplant Immunology Paradigm and Generalization of the Transplant Paradigm.)  With Rolf Zinkernagel, he suggested that the seminal mechanism of clonal exhaustion-deletion could be subverted by excessive immunosuppression and explained how this self-defeating consequence of therapy could be avoided with better timing and dosage of drugsand (See: Therapeutic Implications). 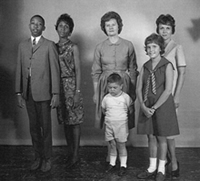 Early kidney transplant recipients and their maternal donors.  The children at the right and left survived for more than 25 years.  The small boy in the middle had 5 kidney transplantations between the years of 1963 - 1972 and died in 1977. 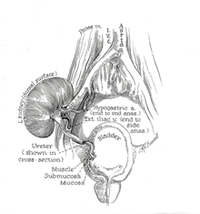 Kidney transplantation to the extra-peritoneal pelvic location described in 1950 by Rene Kuss (1913-2006) (ref 3) and popularized by Joseph Murray with his identical twin cases.