Generalization of the Transplant Paradigm

Because the passenger leukocytes that migrate to host lymphoid organs (Fig. 1, green zone) become prime targets of the response they induce there, it was necessary to explain how small numbers of these cells (microchimerism) could survive in the midst of the organ recipient’s dominant immune population.  Studies in rats [ref 1, 2] and mice [ref 3] provided answers.  In essence, donor leukocytes that evade the initial antidonor T-cell response wander into niches that are inaccessible to immune attack (Fig. 1, yellow outer rim).  Secondary migration of these donor cells back to host lymphoid organs (inward red arrows) was how the exhaustion-deletion achieved at the outset was maintained.  However, if the retrograde traffic is not continuous or if the number of donor cells is too small, the anti-donor response recovers and results in immunity.  Simply put, alloengraftment and allograft rejection were the opposite sides of the same coin.

This concept was buttressed by independent studies in experimental infection models during 1993-4 by Rolf Zinkernagel (Nobel Laureate, 1996) showing that tolerance (or alternatively immunity) to viruses and other intracellular microparasites is produced and maintained by the same 2-stage migration of the noncytyopathic pathogens.  With mutual recognition that these pathogens were antigenic equivalents of donor leukocytes, Starzl and Zinkernagel described a range of transplant scenarios and their infection analogues [ref 4].  All tolerance outcomes could be explained by 2 mechanisms:  clonal exhaustion-deletion and immune ignorance.  The milieu required for clonal activation → exhaustion → deletionincluded the cytokines, growth factors, interacting cell types, and location-specific anatomical features of the host lymph nodes, spleen, and other organized lymphoid collections.  The second mechanism, immune ignorance, referred to antigen whose presence is not recognized if it fails to reach these host lymphoid organs.

The overall conclusion in this 1998 review was that “The migration and localization of antigen govern the immunologic responsiveness or unresponsiveness against infections, tumors, or self --- and against xenografts and allografts”.  With this paradigm, all immunologic outcomes are determined by the balance reached between the quantity of antigen with access to host lymphoid organs and the number of antigen-specific T cells induced at these lymphoid sites.  In the context of transplantation, the association of leukocyte chimerism and tolerance becomes stronger with progressively greater contributions of donor cells to the recipient’s total lymphoid mixture (Fig. 2).  No matter how dominant, however, donor leukocyte chimerism is not synonymous with tolerance.  The determinate factor always is the donor leukocyte/T-cell response balance.  Moreover, the balance is never fixed absolutely.  Because of the recipient properties of both its numerator and denominator, the balance is continuously changes, most dramatically during the massive cell migration early after transplantation (Fig. 2).

Leukocyte dominance at the microchimerism level explained how organs (most commonly liver) in numerous experimental models could self-induce their lifetime acceptance without any treatment or with the aid of a short course of immunosuppression.  The drug-free state of these animals or of Dr. Starzl’s prize dogs of 1962-63 and his early kidney recipients (See: Generalization of the Transplant Paradigm) was generally dismissed as operational tolerance, pseudotolerance or other terms.  With the assumption that chimerism was not present, the drug-free state was attributed to special cells (regulatory, suppressor, veto) cytokine profiles, enhancing antibodies, graft secretions, and cytoprotective molecules.  The misconception was not corrected until the microchimerism discoveries of 1992 (See: Discovery of Microchimerism and A New Transplant Immunology Paradigm).  When experimental models of spontaneous or “immunosuppression-aided” tolerance were reexamined by Dr. Starzl’s colleagues, they always revealed the presence of microchimerism.

Citation analysis of publications in this theme is presented in Figure 3 and Figure 4.

Generalization of the Transplant Paradigm Bibliography and Citations 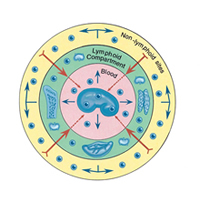 Two-staged spread of an allograft’s passenger leukocytes. The kinetics and pace of events mimic those of a spreading noncytopathic virus or other kind(s) intracellular microparasite. 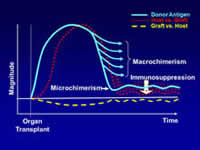 Balances of antigen and antigen-responsive T-cells that define all immunologic outcomes.