Dr. Starzl described how he developed his abdominal organ transplant models in the 2002 Charles G. Drake History of Surgery Lecture of the American College of Surgeons [ref 1] and in his 2010 contribution to the Master’s Perspective Series of the Journal, Hepatology. [ref 4] The story began in 1956 with questions about the liver’s double blood supply.  About 25% of this flow is oxygen-rich arterial blood, delivered by the hepatic artery.  The rest is oxygen-poor venous blood brought by the portal vein after it picks up hormones, nutrients, and other substances draining from the pancreas and intestinal tract. Starzl’s original objective was to determine in dogs whether the first pass delivery of these portal venous contents to the liver in high concentration was important for optimum total body metabolism and for liver health specifically.  Because this had been an enigmatic question for most of the preceding century, Starzl recognized that different models than the historical ones would be required to test the hypothesis.

One of the potential models of which Starzl had previously been unaware was the canine auxiliary liver transplantation described a year earlier in an obscure journal (C. Stuart Welch:  A note on transplantation of the whole liver in dogs.  Transplant Bull 2:54-55, 1955).  In his operation, Welch (Figure 1) provided an extra liver (an allograft) with normal arterial blood but with a portal supply of venous blood returning from the lower half of the body (Figure 2).  The dog's own liver retained its normal portal inflow.  When the transplanted liver underwent dramatic shrinkage, this was attributed to rejection.  After Starzl learned of the procedure at a lecture by Welch in 1957, he suggested to Professor Welch that the real cause for the shrinkage of the allograft was its deprivation of unstipulated special ingredients of portal blood.  Realizing the potential value of liver transplantation for a variety of metabolic studies, Starzl now developed 2 operations that are in clinical use today.

In one of his new models, the recipient liver was replaced with the liver of a donor dog (Figure 3). [ref 1]  In the other, termed multivisceral transplantation, the allograft consisted of the liver and all of the other abdominal organs. (Figure 4) [ref 2]  Survival after these procedures had 2 prerequisites.  The first was avoidance of damage to the recipient venous systems during their blockage for the approximately one hour required to remove the recipient’s liver and to sew in the liver graft.  The problem was solved by bypassing blood from the lower to upper half of the recipient body with plastic tubes. (Figure 5)  The second prerequisite was prevention of ischemic injury to the donor liver which was deprived of a blood suuply from the time of its removal until it was reconnected with the vessels of the recipient.  This was accomplished by infusion of cold solutions into the graft blood vessels (Figure 6), a now universal first step with preservation of all transplanted organs that had never been done before.

Immunosuppression did not exist at the time.  Consequently, the new transplant operations were generally dismissed as technical exercises of little interest or potential value.  However, they marked the beginning of 2 avenues of translational research pursued by Dr. Starzl until the end of his surgical career, and beyond.  The dominant theme was transplantation.[ref 3]  But the original question of whether the portal blood had special liver supportive qualities was never far from his mind (See Hepatotrophic Physiology). 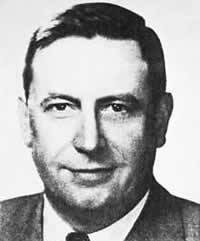 C. Stuart Welch (1909-1980), author of the first article in the literature on liver transplantation. Information about Welch's tragic person life can be found in The Puzzle People (pp: 126-129) 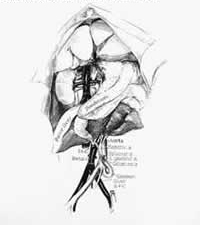 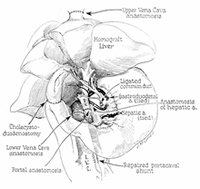 Complete liver replacement in the dog. The fact that the recipient was a dog rather than a human is identifiable only by the multi-lobar appearance of the liver 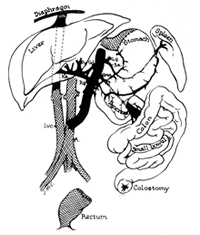 Schematic view of the organs of a multivisceral graft (not shaded) 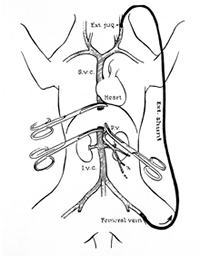 Decompression of the blocked portal and vena caval beds

Heat map showing citation frequency for each publication in this Theme